Did Jesus Die on a Cross or a Stake?

Why do JWs think this is an important issue?

What does the Bible teach?

It is true that in classical Greek this word [stauros] did mean an upright stake, or pole, but later by the first century it also came to refer to an execution stake having a crosspiece. Likely it was such a crosspiece that Jesus carried to Golgotha. We all know words which have now taken on a different, even opposite, meaning from their origin, eg. awful (‘wondrous’ but now meaning terrible); bully (‘sweetheart’ but now meaning cruel); shuttle (‘used in weaving’ but now a space vehicle). Hence, in the 21st century, the word in modern Greek for ‘cross’ is ‘σταυρóς’ (stauros) – the same as it was in the first century.

Consider the following six lexical works revealing the development of the word stauros:

But a JW may object by quoting three contrasting reference works:

Vines Dictionary: stauros “denotes, primarily, an upright pale or stake. On such malefactors were nailed for execution. Both the noun [stau·ros´] and the verb stauroo, to fasten to a stake or pale, are originally to be distinguished from the ecclesiastical form of a two beamed cross.”

Historical evidence shows that the cross was in common use in Jesus day, meaning that Vine’s (W. E. Vine was baptised Plymouth Brethren) is inaccurate. By the time of Jesus death, stauros could linguistically mean either cross or stake.

David W. Chapman comments that: … the “fundamental” references to an upright pole in σταυρός […] does not rightly imply that such terminology in antiquity, when applied to crucifixion, invariably applied to a single upright beam. This is a common word study fallacy in some populist literature. In fact, such terminology often referred in antiquity to cross-shaped crucifixion devices. https://tinyurl.com/y49w5lsy

The Imperial Bible-Dictionary is only quoted in part in the JW’s Reasoning Book. Here is the complete quotation – the bold words are omitted in their publication:

“The Greek word for cross, stauros, properly signified a stake, an upright pole, or piece of paling, on which anything might be hung, or which might be used in impaling a piece of ground. But a modification was introduced as the dominion and usages of Rome extended themselves through Greek-speaking countries. Even amongst the Romans the crux (from which our cross is derived) appears to have been originally an upright pole; and this always remained the most prominent part. But from the time that it began to be used as an instrument of punishment, a transverse piece of wood was commonly added… There can be no doubt, however, that the latter sort was the more common, and that about the period of the gospel age crucifixion was usually accomplished by suspending the criminal on a cross piece of wood.”

The Imperial Dictionary shows quite the opposite of what the Watchtower attempts to prove.

The Non-Christian Cross, by John Denham Parsons” is quoted in the Reasoning Book for support that Jesus did not die on a stake. John Parsons was a skeptic who also wrote “Our Sun-God: Or Christianity before Christ”, trying to prove a connection between Jesus and the Egyptian God Horus.

JWs say, “The cross was originally a pagan symbol.”

Cats were worshipped as gods by the Egyptians but is this a reason for Christians to avoid cats?

David Williams, writing of medieval images, says: “The disembodied phallus is also formed into a cross, which, before it became for Christianity the symbol of salvation, was a pagan symbol of fertility.” (David Williams, Deformed Discourse: The function of the Monster in Mediaeval thought and literature, McGill-Queen’s Press 1999, p161.)

JWs say, “The first 300 years of Christianity shows Jesus on a stake.” 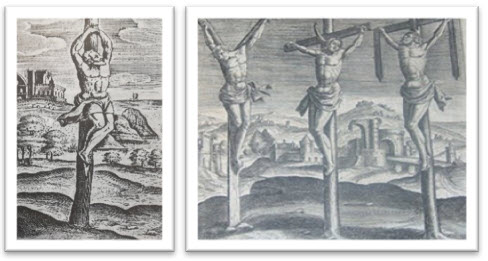