“The fundamental reason why we cannot, yes, will not, accept blood transfusions is because of what God’s Word says. Ours is basically a religious objection.” (Awake 1977 Oct 22 p.26)

They believe that blood is sacred and represents life in God’s eyes and understand scriptures, especially Gen 9:3-6 Lev 17:10–14 and Acts 15:29, to include taking blood into the body via a transfusion. Before we examine these Scriptures, we need to first clarify what blood symbolises in Scripture?

What does blood symbolise?

The three scriptures upon which JWs base their teaching.

It is claimed that, since all humans descend from Noah and his sons, these commands still apply to all persons. The ordinances on blood in the Mosaic law are viewed as elaborations on this basic law.

It is claimed that transfusing blood can be equated with intravenous feeding. (WT 1951 July 1 p.415)

“Consider a man who is told by his doctor that he must abstain from alcohol. Would he be obedient if he quit drinking alcohol but had it put directly into his veins?” (Reasoning from the Scriptures p.73)

3. “JWs can use blood fractions”

It was in the year 2000 that the Society’s position on blood fractions was clarified (WT 2000 June 15 p.29-31; Oct 15 p.31). It was asserted that blood is comprised of 4 components, which JWs cannot accept. But these four can be then be broken down further into fractions which they can use if their individual conscience allows. “Although [Jehovah’s Witnesses] do not donate or store their own blood for transfusion purposes, some procedures or tests involving an individual’s blood are not so clearly in conflict with Bible principles. Therefore, each individual should make a conscientious decision.” (KM 2006)

Below is an illustration from their 2021 Interactive Bible Course “Enjoy Life Forever!” p.165

“Keep abstaining from things sacrificed to idols and from blood, [that is; whole blood and its four major components – red cells, white cells, platelets and plasma. However, one may freely partake of fractions of these aforesaid four components, unless your conscience should disallow these] and from things strangled …” 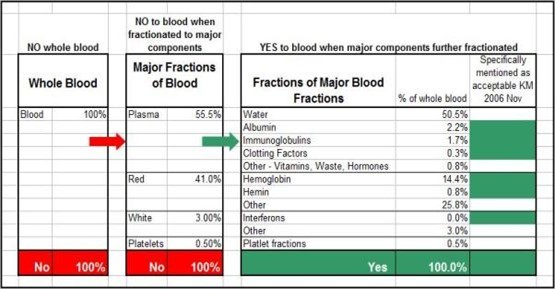